Dengue is an infection caused by the dengue virus of which there are four different subtypes. The disease is transmitted by mosquitoes 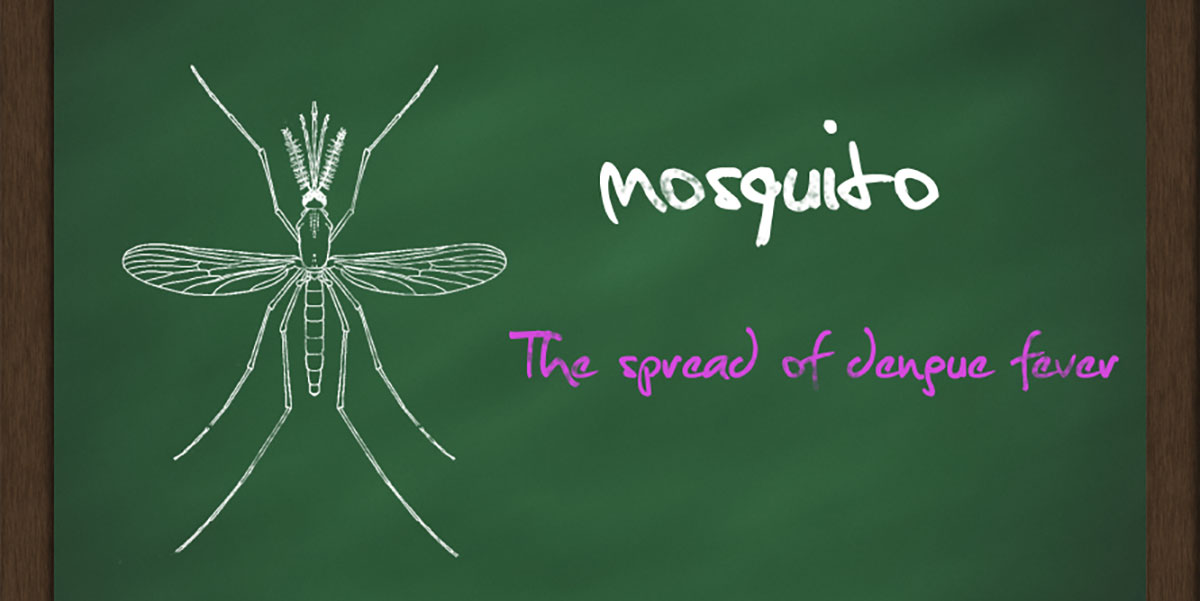 Dengue is caused by a virus of the genus Flavivirus, within the family Flaviviridae. It is transmitted by the bite of an infected Aedes spp. mosquito, which predominantly feed between dawn and dusk.

There are four distinct serotypes of dengue virus: DEN 1, DEN 2, DEN 3 and DEN 4. All have the potential to cause either dengue or severe dengue, also known as dengue haemorrhagic fever (DHF).

During the 18th and 19th centuries, major epidemics occurred at intervals of 10 to 40 years in Asia, Africa and North America [1, 2]. The Aedes mosquito and the dengue virus were dependent on sailing vessels to transport them from one population to another, and when a new serotype was introduced, new epidemics occurred [1].

The epidemiology of dengue changed after the Second World War, due to increasing economic growth and the urbanisation of South East Asia in particular, where millions of people moved into cities. The dengue virus spread rapidly and the disease developed into pandemic proportions [3].

According to the World Health Organization (WHO) the number of cases reported worldwide has grown dramatically in recent decades. WHO Member States in three regions regularly report annual case numbers and these increased from 2.2 million in 2010 to 3.2 million in 2015 [2]. However, many factors, including under reporting, misclassification of disease and the practice of reporting confirmed cases only, means the global burden of disease is likely to be far greater. A recent estimate of 390 million dengue infections occurring globally per year, with 96 million presenting with symptoms [4], underlines the potential impact of dengue on populations in endemic regions.

Dengue occurs in tropical and sub-tropical climates worldwide, mostly in urban and semi-urban areas. Dengue is endemic in more than 100 countries in Africa, the Americas, the Eastern Mediterranean, South-East Asia and the Western Pacific with Asia accounting for 70% of the global burden of disease. The number of dengue cases reported to WHO increased from 505,430 cases in 2000, to 5.2 million in 2019 [2, 5].

Dengue, countries or areas at risk, 2021

Dengue is an emerging disease outside tropical areas, including parts of Europe [6]. During 2010, locally acquired cases were reported in Croatia [7]. In France, sporadic cases of local dengue transmission have been reported since 2010 and other reports in Spain and Italy [8].

From September 2012 to March 2013, the autonomous Portuguese island of Madeira reported its first dengue outbreak, with 2,168 probable and 1,080 confirmed cases. Imported cases associated with this outbreak were also detected in returning travellers to other countries in Europe, including the UK [9,10].

The chance of contracting dengue is determined by several factors, including destination, length of exposure, intensity of transmission and season of travel. Risk is thought to be higher during periods of intense mosquito feeding activity (two to three hours after dawn and during the early evening) [5, 12].

All travellers to dengue endemic countries are at risk, although determining actual risk level is difficult. See Country Specific Information rationale. True dengue incidence in travellers is probably underestimated as in many countries dengue reporting is not obligatory. Also, due to non-specific symptoms, dengue is probably under-diagnosed [13].

Travellers who spend long periods in endemic areas (such as expatriates or aid workers) are at increased risk. However, even short-term visitors may be exposed [ 13-15].

Dengue does not occur naturally in the United Kingdom (UK), it is a travel-associated infection. Most cases reported in returning UK travellers are acquired in Asia, the Americas or the Caribbean. In 2014, a total of 347 individual cases of dengue were reported in England, Wales and Northern Ireland by Public Health England (PHE). Between 2009 and 2014 an overall average annual increase of 36 percent in cases was reported by PHE [16].

Dengue is transmitted from human to human by different species of Aedes mosquito. In parts of Asia and Africa, the transmission cycle may also involve jungle primates that act as a reservoir for the virus [17]. Reports of sexual transmission are very rare [18,19].

Aedes aegypti is the principle mosquito vector associated with dengue transmission and is closely associated with humans and their dwellings. A. aegypti mosquitoes breed in water containers (including buckets used to collect rainwater, cisterns, toilets and tyres) and rest inside in cool, dark rooms. In forests, they breed in water-filled tree holes. They are most active during daylight hours, when they feed from dawn to dusk, but can bite at night in well-lit areas [20].

In about 75 percent of cases there are no symptoms [20]. When symptoms occur, illness begins abruptly after an incubation period of five to eight days. There may be high fever (up to 40oC) often accompanied by a severe headache and retro orbital (behind the eye) pain, muscle and joint pains, nausea, vomiting, abdominal pain and anorexia. High temperature can persist for five to six days. Around the third to fourth day, a maculopapular skin rash may be seen on the chest, trunk and extremities [17].

Health professionals should be alert to the warning signs of severe disease, which include: mucosal bleeding, abdominal pain, liver enlargement and fluid accumulations.

The clinical picture of dengue is often characteristic and diagnosis is confirmed by blood test (serology and viral detection) [21-22].

Treatment of dengue and severe dengue is supportive (i.e. aims to manage the symptoms and complications of the infection). Most infections are self-limiting, with improvement in symptoms and rapid recovery occurring three to four days after the onset of the rash.

Nursing care in hospital, with careful management of fever, fluid balance, electrolytes and blood clotting is standard. Intensive care is essential for patients with shock and major organ compromise. With good nursing and medical support, death due to severe dengue is typically less than one percent [17].

Anti-viral and steroid therapies have not been shown to aid recovery [17].

Health professionals should be alert to the possibility of dengue in those who have recently returned from a dengue risk area presenting with a fever or flu-like illness [22, 23].

Clinical advice should be sought in the first instance from a local microbiology, virology or infectious disease consultant. Health professionals who suspect dengue should send appropriate samples for testing (with full clinical and travel history) to the Public Health England Rare and Imported Pathogens Laboratory.

The Imported Fever Service offers health professionals a 24-hour, seven day a week telephone service with access to expert clinical and microbiological advice. This offers support in management of febrile patients, and with infection control and public health interventions.

Prevention is by avoidance of mosquito bites especially during daylight hours. Particular vigilance with bite precautions should be taken around dawn and dusk. Those living in endemic areas should remove rubbish or water containers close to their home where possible as they can be breeding sites for mosquitoes.

There is currently no vaccine available to prevent dengue in travellers. Several vaccine candidates are in clinical or pre-clinical development [24, 25].

One vaccine Dengvaxia® has been licensed in a small number of endemic countries for use in the local population aged between 9 and 45 years of age [24].

WHO Strategic Advisory Group of Experts reviewed vaccine provisions in 2016 and recommended countries consider introduction of the vaccine only in geographic settings with a high burden of disease [26]. However, in 2017 the WHO recommended that the vaccine should not be administered to those who had not had a previous episode of dengue due to the increased risk of severe dengue in dengue naive subjects [27].

WHO recommends prevention of dengue through vector control methods such as mosquito habitat removal and use of insecticides, surveillance, case management and development of future vaccines [25].