Enjoy the sun safely - limit your sun exposure, protect your skin and eyes to avoid damage from the sun’s ultra violet rays 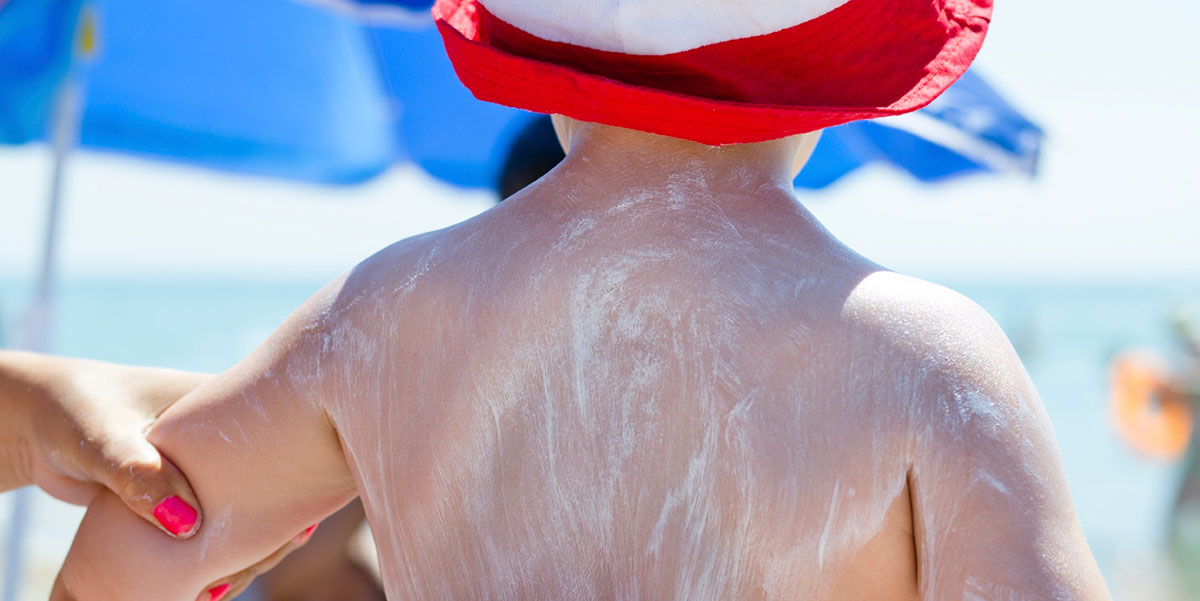 Sun damages skin by ultraviolet (UV) radiation, with UVA and UVB rays posing the greatest risk for sun damage. Overexposure to sunlight is the underlying cause of damage to skin, eyes and the immune system [1]. UVA is primarily responsible for skin aging, but can cause skin cancer, while irradiation by UVB causes the majority of sunburn, which is linked to the development of malignant skin cancers [2].

While a tan is often associated with looking healthy, it actually indicates that skin has been damaged by UV radiation and is trying to protect itself. Tans increase skin cancer risk: both sunburn and heavy tans are harmful [2].

Everyone should avoid excessive sun exposure, but those at greatest risk of damage are [3]:

Dark skin has more protective melanin pigment and skin cancer is less common, but there is still a risk [5]. When skin cancer is detected, it may present at a late, more dangerous stage [3, 5].

Levels of UV radiation depend on a number of environmental factors [3] including:

Burning is possible on cool, cloudy days, as the water content in clouds does not absorb UV radiation in the way it absorbs heat. A cool wind is falsely reassuring as UVB levels remain unchanged on windy days.

Ideally sun exposure should be limited between 11am and 3pm (local time) when the sun is usually at its strongest.

UVA and UVB levels can vary greatly between winter and summer in areas such as northern Europe. However, they are consistently high all year round in tropical and sub-tropical countries near the equator.

There is no such thing as a healthy tan – it is a sign of UV radiation skin damage [3].

When UVB penetrates deep skin layers, it is absorbed by DNA and cell damage occurs. As a result, cells try to repair themselves by releasing chemicals [2]. Sunburn is a visible reaction, causing redness, heat and pain. Sometimes damage is so severe that cells die, causing blistering, swelling and weeping. Fluids and pain relief can help relieve symptoms.

Sun cream absorbs UV light, but is not 100 per cent protective.

Photo-ageing is long-term skin damage from both UVA and B radiation. The skin’s structure deteriorates; resulting in dryness, roughness and thickening. Sometimes skin also becomes thin and fragile.

Skin cancers are divided into non-melanoma skin cancers (NMSC) and melanomas. NMSC include basal cell and squamous cell carcinomas. Frequency of both NMSC and melanomas has been increasing over the past decades and one in every three cancers diagnosed worldwide is now a skin cancer [7]. Higher risk factors include:

Skin cancers occur when cells undergo malignant transformation due to UV radiation damage to their DNA. These cells reproduce independently and can spread to neighbouring tissues or spread via the bloodstream to the body’s major organs. Skin cancers are usually treated with surgery, although sometimes radiotherapy or chemotherapy is needed too.

Between two to three million cases of NMSC occur worldwide each year [6]. NMSC can be painful and disfiguring and are usually found on body parts more exposed to the sun: arms, ears, face and neck. NMSC accounts for less than 1% of all cancer deaths in the UK [7]; cure rates are very high and generally the outlook is very good [8].

Basal cell carcinoma is the most common NMSC accounting for 80 percent of all cases. It can cause disfigurement and presents as a scab that does not heal or a nodule with a pearly rim and central crater. Basal cell skin cancers can be cured in most cases; it is extremely rare for this type of skin cancer to spread to another area of the body [9].

Squamous cell carcinoma is less common, but potentially more serious than basal cell carcinoma. This type of skin cancer can vary in appearance, but often presents as a raised, crusty area of skin with an inflamed base; sometimes the affected areas may be sore and/or bleed. Squamous cell skin cancers can be cured in most cases, but in a small number of people spread to the lymph nodes or to other parts of the body occurs [9].

Malignant melanomas are the most serious form of skin cancer which may spread to other parts of the body. Since the 1990s, the rate of melanoma skin cancers has increased; in the UK rates have increased through all age groups (25 to >80 years), with the biggest increases occurring in older persons [7]. These increases are likely to be due to many factors, including exposure to UV radiation. Intermittent exposure to UV light from strong sunlight, or exposure from artificial sources to UV light i.e. use of sunbeds, are risk factors that increase the risk of developing melanoma [9]. Treatment is surgery to remove the lesion and chemotherapy or radiotherapy, if the cancer has spread to other parts of the body [9].

Some people have an abnormal skin reaction to UV radiation, called photosensitivity. Symptoms include: a red, itchy rash and blistering. This can also be caused by certain creams or gels applied to the skin, or tablets, injections or intravenous infusions. Photosensitivity may occur within minutes of sun exposure and typically appear, usually as a rash on the face, back of the neck and upper chest.

Unprotected, eyes can be damaged by repeated exposure to sunlight.

Photokeratitis is inflammation of the cornea, whilst photoconjunctivitis is inflammation of the conjunctiva. Both conditions are comparable to sunburn of eye tissues. They are very painful, but reversible and not usually associated with long-term damage. An extreme form of photokeratitis, called snow blindness, can occur in skiers and climbers exposed to extreme UV radiation levels due to high altitude and strong sun reflection from snow. Blindness results from inflammation of conjunctiva and cornea. These damaged tissues usually renew quickly and sight returns in a few days. However, very severe snow blindness can cause chronic irritation [6].

Eyes should be protected by sunglasses or goggles that block UVA/B rays and which carry the CE standard mark.

It is still possible to enjoy the sun, but extra precautions should be taken. The best way to avoid risk associated with UV radiation is by reducing sun exposure.

The World UV App - developed by the British Association of Dermatologists and the Met Office provides live UV ratings worldwide and is free to download.

Sun creams are one of the most common ways to protect skin against the damaging effects of the sun. They contain either physical filters to block UV or chemicals that absorb various wavelengths of UV radiation. Sunscreens are rated by their sun protection factor (SPF). This is the relative protection against sunburn received after applying the sunscreen, compared to not using it. The higher the SPF rating, the better the protection.

As an example: if it takes 10 minutes for a person to burn, applying an SPF 15 sun cream means that it will take 15 times as long (150 minutes) for them to burn. Broad spectrum sun creams block UVA radiation as well as UVB. The ‘star’ system used in the UK shows the amount of UVA protection a sunscreen offers: 0 is the lowest and five the highest. Physical sunscreens containing titanium oxide or zinc oxide reflect both UVA and UVB rays.

Studies show that DEET insect repellents (33 percent) can decrease protection of SPF 15 sunscreen [10]. There is no evidence that sunscreen reduces efficacy of DEET when used at concentrations above 33 percent [11, 12]. When both sunscreen and DEET repellents are needed,DEET should be applied after the sunscreen. 30 to 50 SPF sunscreen should be used to compensate for the DEET- induced reduction in SPF [13].

Seek urgent medical advice for any changes to moles, such as increases in size, itchiness, bleeding or oozing, or if a new mole develops very quickly. These could be potential signs of cancer.

Depending on the destination, travellers may be at risk of a number of different diseases Read more
Back to Top