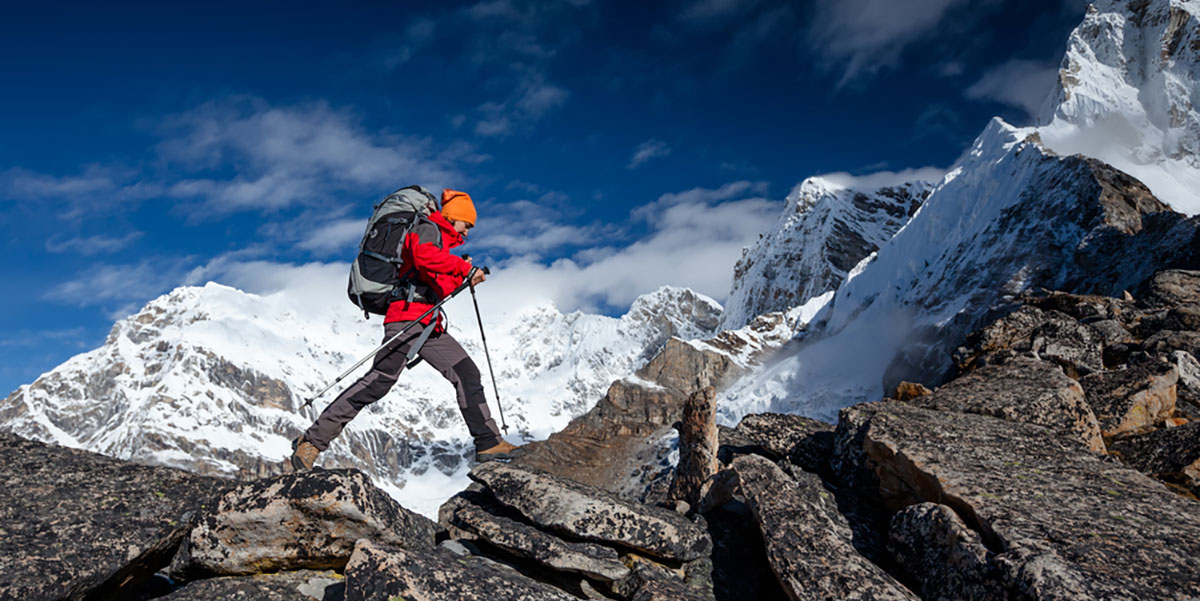 In recent years travel to high altitude has become increasingly popular and accessible [1]. High altitude is defined as an elevation above 1,500m and can be subdivided into the following categories: high altitude 1,500m–3,500m, very high altitude 3,500-5,500m and extreme altitude > 5,500m [2]. Altitude illness usually occurs at altitudes over 2,500m, however it is recognised that susceptible individuals can experience illness below this altitude.

With increasing altitude, the percentage of inspired oxygen remains constant at 21 percent; however, the air pressure (barometric pressure) decreases. This results in a reduced number of oxygen molecules taken in with each breath and ultimately to reduced oxygen delivery to the body’s tissues. If an individual ascends gradually to high altitude the human body is usually able to adjust to these reduced oxygen levels. This adjustment process is known as acclimatisation. If ascent is too swift, then acclimatisation may not occur rapidly enough and altitude illness may ensue [3].

Some people are at higher risk of severe infection from COVID-19. This mainly relates to age and any existing medical conditions and includes those prioritised for COVID-19 vaccination (see Table 2 and 3 in Immunisation against Infectious Disease).

All individuals, but particularly those at high risk and previously considered clinically extremely vulnerable to severe COVID-19 disease, should follow current UK recommendations to reduce their risk of infection and consider whether postponing travel would be appropriate.

General guidance regarding risk assessment for travel during the COVID-19 pandemic and information about the COVID-19 vaccination programme is available.

Studies of altitude illness report marked variation in prevalence, mainly as a result of the different ways these studies were performed. Approximately 9-25 percent of unacclimatised individuals ascending to 2,000-3,000m develop AMS compared to 35-50 percent of those ascending to 3,500-4,500m [4-6]. HACE and HAPE are much less common than AMS. Both are extremely rare below 2,800m and seem to occur at an incidence of around 1-2 percent at altitudes between 4-5,000m [7].

The risk of developing altitude illness is determined by both factors relating to the trip and those of the individual.

Risk factors relating to the trip include: the rate of ascent, absolute change in altitude and sleeping altitude [8]. These are important to consider when planning a trip to altitude. Ideally expeditions or treks should comply with Wilderness Medicine Society suggested maximum ascent rates [9, 10] (see preventing altitude illness). Treks with a rapid ascent rate (e.g. the ascent of Mount Kilimanjaro in less than 7 days) are of concern [9, 11].

Risk factors relating to the individual include: previous history of altitude illness, normal residence below 900m, exertion on arrival to altitude and certain pre-existing cardiovascular conditions [8]. Physical fitness does not appear to protect against altitude illness [8]. Despite knowledge of these risk factors, accurately determining an individual’s susceptibility to altitude illness is not possible. Previous performance at altitude is probably the best predictor.

The Wilderness Medicine Society has combined knowledge of individual and trip-related risk factors to categorise the risk of AMS. These risk groups refer to unacclimatised individuals. The altitudes correspond to sleeping altitude and they assume ascent will start from elevations < 1,200m [9, 10].

AMS and HACE are the neurological forms of altitude illness and are likely to represent two points on a spectrum of the same disease with HACE being the more severe form. Symptoms of AMS do not start immediately on arrival at high altitude, typically they occur 6-10 hours after ascent to > 2,500m (but may rarely occur at altitudes between 1,500-2,500m) [8].

The Lake Louise Consensus Group defined AMS as the onset of headache in an unacclimatised individual who has recently arrived at altitude accompanied by one or more of the following: gastrointestinal symptoms (anorexia, nausea, vomiting), dizziness, fatigue or weakness [12]. The Lake Louise criteria are a useful guide but are mainly used as a research tool and in general any new symptoms occurring after ascending to altitude should be regarded as altitude illness until proven otherwise. AMS is usually self-limiting and if further ascent is delayed it tends to resolve in 1-3 days [1].

HACE is caused by swelling of the brain (cerebral oedema) and is characterized by the onset of confusion, altered consciousness and or incoordination (ataxia). HACE is commonly preceded by AMS [13].

HAPE is the respiratory form of altitude illness. Initial symptoms include breathlessness on exertion, and a dry cough. These may progress to breathlessness at rest, breathlessness when lying flat, a wet cough, blood stained sputum, wheeze and chest tightness [14]. HAPE may occur in the absence of AMS. HAPE and HACE tend to occur at least 2 days after ascent to altitude greater than 3-4,000m and rarely occur at altitudes lower than 2,800m [14]. They are uncommon but severe forms of altitude illness and frequently occur together. Without intervention they may rapidly progress to death [14].

Headache at high altitude is very common [15]. Despite forming part of the diagnostic criteria for AMS it can occur independently and could easily be associated with other issues such as exhaustion, dehydration or hangover.

Periodic breathing at altitude describes the cycle of rapid breathing (hyperventilation) alternating with episodes of decreased breathing (hypoventilation) and pauses in breathing (apnoea) [2]. Individuals often wake during apnoeic episodes and although alarming for those affected or their companions it is usually harmless.

AMS, HACE and HAPE are all diagnosed based on clinical findings [12]. The severity of AMS is determined subjectively by the intensity of the symptoms reported by the individual [12]. The symptoms of AMS can easily be confused with other conditions. Because AMS can in some cases develop in to more severe life threatening illness, a traveller with relevant symptoms who has recently ascended to a new altitude is assumed to have AMS until proven otherwise, and should follow management advice for this. It is important to remember that many high altitude settings are based in remote locations away from medical care.

Travellers with AMS should stop further ascent (symptoms often resolve in 1-3 days), rest, take basic analgesia (painkillers) such as ibuprofen or paracetamol and anti-sickness medication if needed and descend if symptoms deteriorate or do not improve over one to two days [10].

Travellers with symptoms of HACE and HAPE require urgent medical attention and should descend to a lower altitude [9, 10]. Oxygen, portable hyperbaric chamber and medicines such as nifedipine / dexamethasone are sometimes carried by experienced climbers, medics and guides. When available, these can be used to aid descent.

Treatment information is available from the Wilderness Medicine Society 2014 guidelines [9] and the update document 2019 [10]. However it has been suggested that the evidence for some of the treatments for altitude related illness is limited, of low quality and that more trials are needed [16].

Serious altitude illness or dying as a result of altitude related illness is avoidable in most cases [17]. The following prevention guidelines are based largely on the Wilderness Medicine Society guidelines [9, 10].

Extremes of temperature can significantly affect medications. Information and guidance about this is available from UIAA.

These must be carefully considered in consultation with a health professional prior to ascent for the following reasons: access to health care and medications is often limited in remote high altitude locations; certain medical problems (e.g. some forms of congenital heart disease) may increase the risk of altitude illness; certain medical problems may limit individual-performance or worsen at high altitude for example chronic obstructive pulmonary disease (COPD) or angina.

Further information is available from the US CDC and the UIAA websites (see resources below).

There is a lack of data regarding the safety of travel to altitude whilst pregnant. It is prudent to avoid high altitude in the first trimester and advisable that at least one scan has been performed to confirm a healthy intrauterine pregnancy [21].

After 20 weeks gestation short stays (hours to days) at altitudes up to 2,500m without heavy exercise in women with uncomplicated pregnancies are thought to pose minimal risk [22]. The World Health Organization (WHO) state that travel to sleeping altitudes over 3,000m or to remote areas is not advisable during pregnancy [23].

Women with complicated pregnancies of any gestation should also avoid travel to high altitude for example those with unexplained bleeding, preeclampsia or risk factors for preeclampsia.

The Summary of Product Characteristics for acetazolamide states that this drug should not be used during pregnancy, particularly during the first trimester [18].

Making specific recommendations for children ascending to altitude is difficult due to limited evidence. Children are not thought to be at higher risk of developing altitude illness compared to adults and travel to altitudes up to 2,500m is considered to be low risk in healthy children [24, 25]. Younger, particularly pre-verbal, children may have difficulty communicating symptoms of altitude illness making diagnosis challenging. Healthy children older than 8 years are likely to be capable of communicating their symptoms effectively and will usually present in a similar way to adults [24]. The Wilderness Medical Society guidelines 2019 suggest acetazolamide can be used for children for the prevention of AMS when indicated (see Table 1) at 2.5mg/kg dose 12 hourly up to a maximum of 125mgs) [10].

The consensus statement of the UIAA medical commission on children at altitude is available online.

Other risks to consider at high altitude

Exposure to low temperatures can lead to hypothermia or and cold injury at altitude. Prevention is key using appropriate non restrictive clothing, maintaining hydration, nutrition and being aware of signs and symptoms. Wilderness Medicine Society has detailed guidelines for the prevention and treatment of frostbite and treatment of hypothermia.

Careful pre-trip preparation can reduce the travel-associated health risks to breast or bottle feeding women and their infants, making for a more enjo Read more
Back to Top