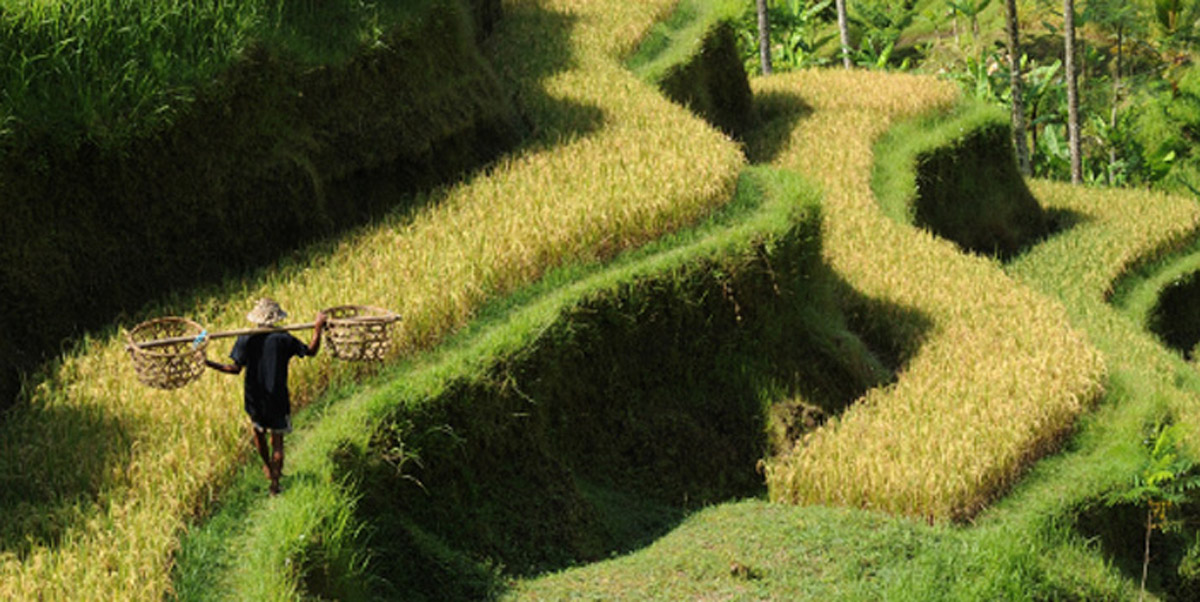 Japanese encephalitis (JE) is viral encephalitis caused by a flavivirus. Other examples of mosquito borne flaviviruses include dengue and yellow fever. The disease is transmitted to humans by Culex spp. mosquitoes in predominantly rural parts of Asia and the Pacific Rim where rice cultivation and pig farming are common.

Figure 1: Countries or areas at risk 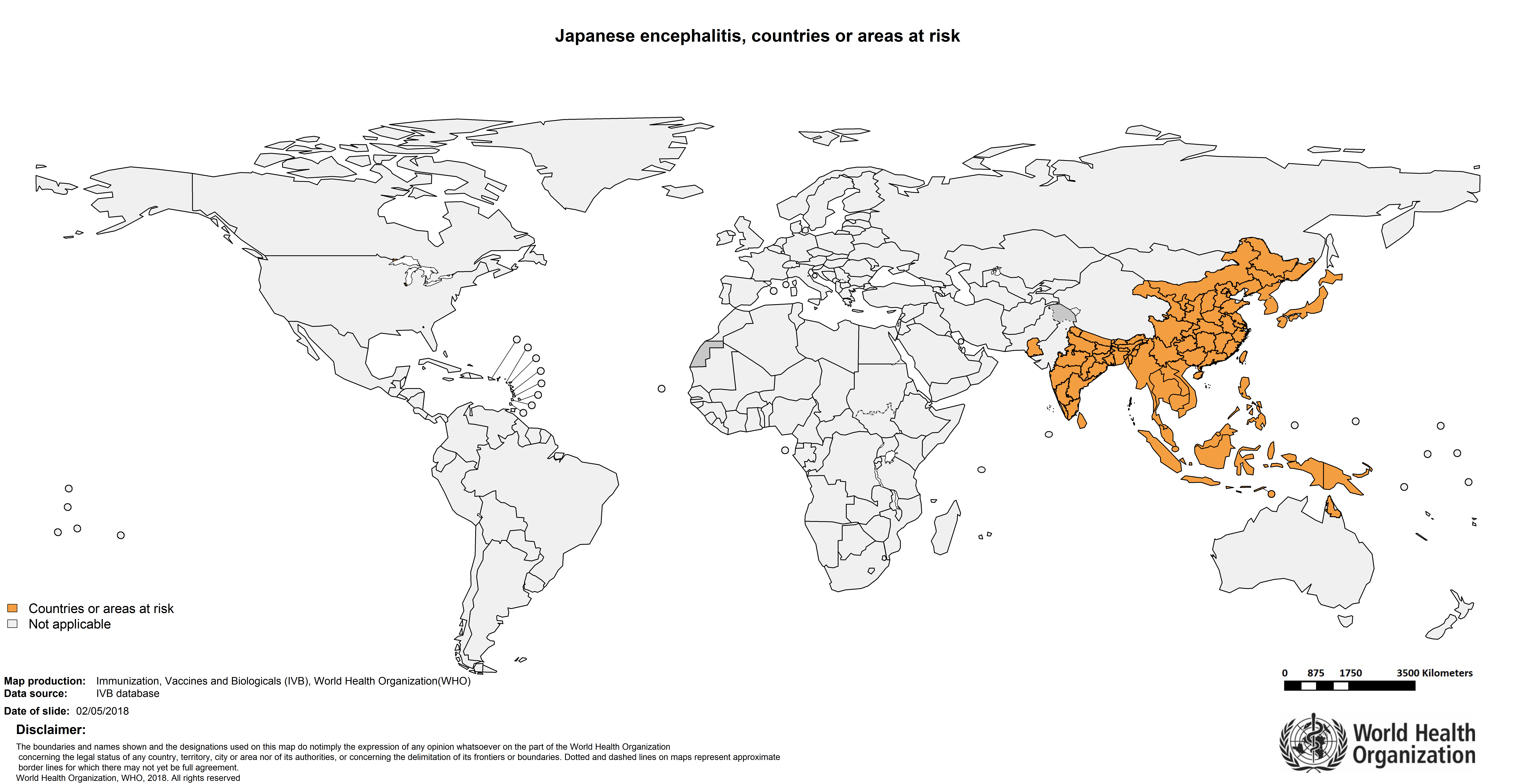 Japanese encephalitis (JE) was first recognised in Japan in the late 1800s, but the first major epidemic (involving 6,000 cases) was described in 1924 [1]. Since then, JE has increasingly been recognised throughout most countries of East and South East Asia (see figure 1) where it is a leading cause of viral encephalitis. The global incidence of JE is unknown. However, it is estimated that 68,000 clinical cases occur every year in 24 JE endemic countries in the in the South-East Asia and Western Pacific regions [2]. China (excluding Taiwan) accounts for 50 percent of cases, and globally 75 percent of cases occur in children aged 0-14 years (annual incidence of 5.4 per 100,000 population) [3]. Most cases of JE are asymptomatic or mild and there seems to be considerable under reporting [4]. Of those who develop encephalitis, many die or are left with long term significant neurological problems [5].

The Torres Strait Islands of Australia reported its first cases of JE in 1995 [6]. The virus is found in pigs on the Islands of the Torres Strait, and the transmission season in this area is considered to be year round.

Factors favouring disease in these areas include: the presence of the vector (Culex spp. mosquitoes), environmental conditions necessary for the mosquito breeding cycle (rainfall, humidity, tropical temperatures), mosquito habitats (such as rice-growing fields, swamps and marshes), and presence of the amplifying hosts (pigs and birds).

The incidence of JE in humans varies by country, higher incidence usually coinciding with the rainy season. However, seasonal patterns can vary within individual countries and from year to year [7]. Seasonal variations may be due to differing irrigation practices and migratory patterns of the susceptible bird hosts in countries where JE is known to occur.

Cases of Japanese encephalitis have been reported in travellers [8 -10]. From 1973 to 2015, a total of 79 confirmed cases of JE were reported in travellers from non-endemic countries [10]. Thirty seven of these cases were reviewed and 24 (65 percent) had spent more than one month in areas where JE is known to occur. Most had factors that increased their risk of infection.

The risk to most travellers to Asia is very low, especially for short-term travellers visiting urban areas. The overall incidence of JE in travellers from non JE risk countries visiting Asia is estimated to be less than one case per one million travellers [9, 11]. The risk varies on the basis of destination, duration, season, and activities. Typically, the risk increases for persons who intend to live or travel for long periods of time in JE risk areas or during outbreaks and have rural trips [1, 12]. Certain activities, even during short trips where there is significant rural, outdoor or night time exposure e.g. fieldwork, camping, or cycling can increase the traveller’s risk [13].

There have been seven documented cases of JE reported in UK citizens. Two were in UK nationals living in Malaysia, who died in the 1950s [14], one died whilst living and working in Hong Kong, in 1982 [15], one was reported in a UK resident who visited Thailand in 1994 and fully recovered after four months [16]. Three cases occurred in 2014/15 in UK citizens who had travelled to Thailand, China and another in either Thailand, Laos or Cambodia. All three had severe, life threatening illnesses, one made a good recovery the other two patients had significant long term neurological problems [17].

JE virus is transmitted to humans from animals and birds via the bite of an infected Culex spp. mosquito. These mosquitoes feed predominantly during the night, between dusk and dawn; pigs and wading birds are the principal hosts.

Culex spp. mosquitoes become infected by biting JE infected animals (particularly pigs) or birds and are prolific in rural areas where flooded rice fields and marshes provide breeding grounds. However, they are also found in cities and urban locations. In temperate regions of Asia, most cases occur in the warm season, when large epidemics can occur [2].

Cases of JE can also occur outside the normal high transmission season [8]. In the tropics and subtropics, JE can occur year-round but transmission often intensifies during the rainy season and pre-harvest period in rice-cultivating regions [2].

Most cases of JE are asymptomatic (without symptoms) or present with non-specific flu-like symptoms. The incubation period is 5-15 days, and initial symptoms include fever, headache and nausea progressing to meningoencephalitis with convulsions and altered consciousness [5, 18]. Of those who develop encephalitis, approximately 30% die. In those who survive, it is estimated that 30-50% will develop long term neurological or psychiatric problems [1].

JE should be suspected in a patient who resides in or has visited an area where JE is known to occur who present with typical symptoms of the disease (see above). Laboratory diagnosis of JE is made by detecting a rise in antibodies to JE in the blood or cerebrospinal fluid (CSF). These antibodies can be detected in the CSF of most patients by four days after onset of symptoms and in blood by seven days [13].

Treatment is supportive with severe cases requiring treatment in an intensive care facility. There is no specific anti-viral treatment. Long-term care for neurological complications may be needed.

The risk of acquiring JE can be reduced by insect bite avoidance methods, particularly between the hours of dusk and dawn, when the Culex spp. mosquito vector is most active.

Travellers are at increased risk of infection when visiting rural areas. Short trips (usually less than a month) especially if only travelling to urban areas, are considered lower risk.

A JE vaccine is available and is recommended for those intending to stay for long periods in regions where JE is known to occur or whose planned activities will increase their risk (see vaccine recommendations below).

All travellers should undergo a careful risk assessment which considers the itinerary, duration of stay, season of travel and planned activities. Country specific recommendations can be found in the Country Information pages.

There is currently one licensed vaccine recommended for use in the UK, IXIARO® [19]. The Green Cross (GC) vaccine and Biken vaccine (JE Vax) are no longer available in the UK.

IXIARO® is licensed for immunisation against JE in adults and children from two months of age [19]. This vaccine is distributed in the UK by Valneva. IXIARO® may be used as a booster for travellers who have received a course of GC or Biken vaccine previously [7].

*See IXIARO® Summary of Product Characteristics for details on preparing the 0.25 ml dose for children aged 2 months to less than 3 years.

In situations where the primary course (days 0 and 28 or days 0 and 7) plus the first booster has been interrupted, the schedule should be resumed, and not restarted.

Adults aged 18-65 years can be vaccinated using a licensed accelerated schedule as follows: first dose at day 0, second dose: 7 days after first dose. With both schedules, the primary immunisation schedule (first and second dose) should be completed at least one week prior to potential exposure to JE [7, 19]. Use of this accelerated schedule can also be considered off license for travellers 2 months -17 years of age and those over 65 years of age when time is short [7].

In clinical studies, approximately 40 percent of vaccinated individuals’ experienced systemic adverse reactions, and approximately 54 percent experienced injection site reactions, such as pain, tenderness and muscle ache. These reactions usually occur within the first three days after vaccination, are usually mild and resolve within a few days [1].

As a precautionary measure, the use of IXIARO® in pregnant and breastfeeding women should be avoided [7, 19]. However, travellers and their medical advisers must make a risk assessment on the theoretical risks of JE vaccine in pregnancy against the potential risk of acquiring JE disease [7].

Rabies occurs in warm-blooded mammals and is transmitted to humans, most often by a bite or scratch from an infected animal, usually a dog Read more
Back to Top