Viral Haemorrhagic Fevers (VHF), with the exception of dengue, are very rare in UK travellers. They can cause a range of symptoms from relatively mild illness, to severe, life-threatening disease 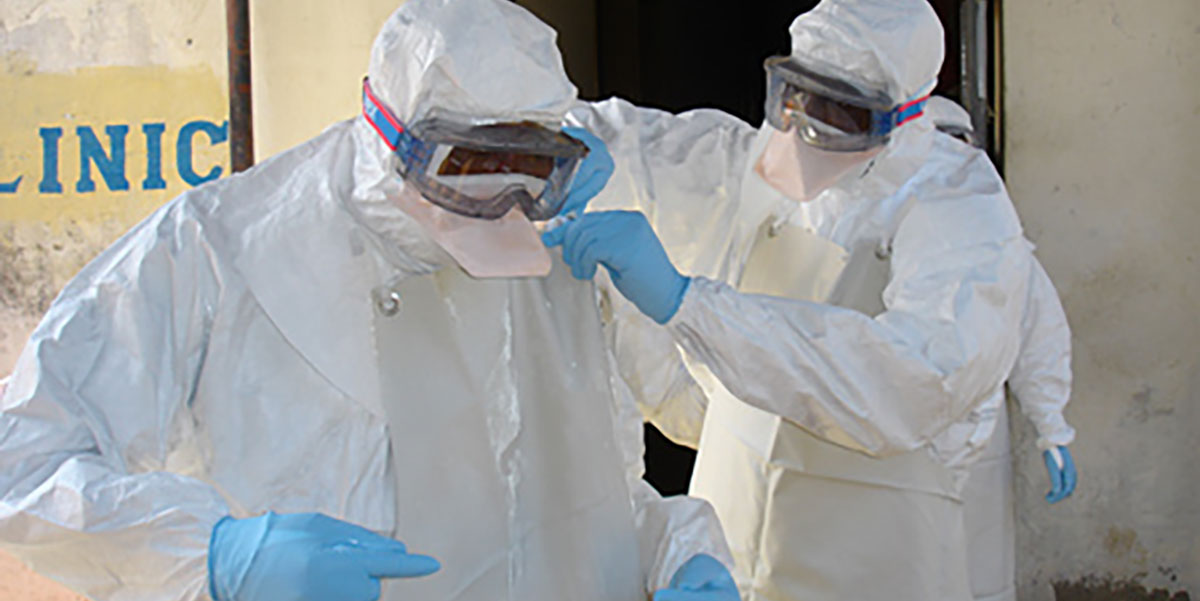 VHFs are caused by a number of highly infectious viruses that belong to one of four families: Arenaviridae, Bunyaviridae, Flaviviridae and Filoviridae. VHFs can cause a range of symptoms ranging from a relatively mild illness, to severe, life-threatening disease associated with shock (severely low blood pressure) and haemorrhage (bleeding). Although viruses causing VHF have several common characteristics, they are diverse and have significant differences in epidemiology, transmission and clinical features.

Viruses that cause VHFs have been identified in many areas of the world and are endemic in some parts of Africa, Asia, and South America. The viruses may be widespread or only occur in specific geographical regions, but these regions may change over time. See Public Health England (PHE) map of Viral haemorrhagic fevers in Africa: areas of known risk.

A map showing the distribution of Crimean-Congo haemorrhagic fever (CCHF) is available from the World Health Organization (WHO). Outbreaks of CCHF have occurred in parts of the EU/EEA neighbouring regions, primarily in the Balkan region, Turkey and Russia. Since 2013, sporadic cases have been reported in Spain, in the regions of Castilla y León and Extremadura [2].

In general, the viruses and early outbreaks are limited to the areas inhabited by their animal hosts. Human cases or outbreaks of VHF occur sporadically and irregularly and are difficult to predict [1].

With the exception of dengue, VHFs are very rare in UK travellers. According to PHE, in the UK, there have been:

Healthcare workers and those who work with animals in endemic areas, or areas where outbreaks are occurring, may be at increased risk of infection depending on the nature of their work.

Humans are not the natural host for VHFs. The viruses exist in nature in mammal (rodent, bat and primate) and/or insect (tick and mosquito) reservoirs. The exact mode of transmission varies between viruses, but humans may become infected following:

The incubation period for VHF is between two days and three weeks. Clinical features vary by disease, but presenting features typically include: fever, headache, muscle aches and exhaustion. Features of severe disease include: pulmonary oedema (leakage of fluid into the lungs), shock (severely low blood pressure), coma and bleeding, for example from the intestines or gums [1, 6].

VHF should be considered in individuals returning from risk areas, particularly in the setting of an outbreak or recent outbreak. Confirmation of the diagnosis requires laboratory testing of a patient’s blood and/or urine samples.

Polymerase chain reaction (PCR) is a technique that can be used to detect virus nucleic acids (genetic material) and may be used to diagnose individual infections. Particular care is required when handling VHF or potential VHF samples, see advice from Public Health England.

Some VHFs can be transmitted from person-to-person via close contact with infected bodily fluids. Individuals with these types of infections should be managed in a specialist setting with implementation of high-level infection control measures. Further advice is available from the Advisory Committee on Dangerous Pathogens (ACDP).

With the exception of yellow fever, there are no UK licensed human vaccines to prevent VHF. Travellers and healthcare professionals can use our outbreak surveillance database to search for current or recent outbreaks of VHF.

Ideally travellers should avoid areas where outbreaks are occurring. Methods of prevention in travellers will vary according to how the infection is transmitted. In general, travellers to risk areas should:

Healthcare workers involved in the care of those with VHF should maintain strict principles of infection control at all times, including:

For healthcare workers caring for known cases of certain VHFs, such as EVD, additional infection control measures are essential. Further guidance is available from the Advisory Committee on Dangerous Pathogens: Viral haemorrhagic fever: ACDP algorithm and guidance on management of patients.

With the exception of yellow fever, there are no UK-licensed vaccines for use in humans to prevent VHF. See our yellow fever factsheet for more information.

Lassa fever was first described in the 1950s and the virus was identified in 1969 when two missionary nurses died from the disease in the town of Lassa in Nigeria. The disease is endemic in Guinea, Liberia, Nigeria and Sierra Leone. Evidence of infection has been found in the Central African Republic, Mali and Senegal. In 2011, sporadic cases were confirmed in Ghana. A single case was reported in the Democratic Republic of the Congo in 2011. Benin reported their first confirmed cases in 2014, had an outbreak in 2016 and continues to report cases. Togo first reported cases in 2016, with further cases in 2017. Burkina Faso also reported a case in 2017 [9].

Lassa virus is present in wild multimammate rats which are common in rural areas of tropical Africa and often live in or around homes. Transmission to humans normally occurs through contamination of broken skin or mucous membranes via direct or indirect contact with infected rodent excreta.

Transmission is also possible where rodents are caught and consumed as food. Person-to-person transmission occurs through contact with infected bodily fluids, such as blood, saliva, urine or semen. This may occur in a healthcare or laboratory setting or via close or sexual contact with an infected individual. The incubation period for the disease is usually between seven and ten days, with a maximum of 21 days. Infection is mild or asymptomatic (without symptoms) in 80 percent of cases, but can cause severe illness and is fatal in approximately one to three percent of patients [9].

RVF virus was identified in 1931 following an outbreak among sheep on a farm in the Rift Valley in Kenya. RVF may infect humans and domesticated animals such as cattle, goats, camels and sheep. The disease tends to occur in eastern and southern Africa in areas where livestock are kept, however the virus also occurs in other parts of sub-Saharan Africa. The first cases recorded outside the African continent occurred in Saudi Arabia and Yemen in 2000 [10]. The virus is usually transmitted to humans via contact with bodily fluids of infected animals, for example through animal slaughter or veterinarian work [11]. The disease may also be transmitted through the bite of an infected mosquito (usually Aedes). Person-to-person transmission is not known to occur [12]. The incubation period is between two and six days. Infection is mild in most cases; however, some patients develop more severe disease [10].

This tick-borne virus was identified in Russia (as Crimean fever) in 1944 and in the Belgian Congo (now Democratic Republic of the Congo) in 1956 [13, 14]. It is the most widely distributed VHF, dependent on the spread of the tick vector. Outbreaks have been reported in parts of Eastern Europe, Africa, the Middle East and Asia [14]. In Spain, CCHF virus was first reported in a tick in 2010. Since September 2016, locally acquired (autochthonous) human cases have been reported in Spain [14] in the regions of Castilla y León and Extremadura [15 -17].

The virus exists in nature in domestic and wild animals including horses, donkeys, goats, cattle, sheep, and pigs. The virus is usually transmitted to humans through the bite of an infected tick, or by direct contact with infected animal/human bodily fluids. Exposure to the virus is also possible from contact with blood from crushing an infected tick. Those at increased risk of infection in endemic countries include farmers, veterinarians, abattoir workers and healthcare workers [18]. Camping and hiking are risk factors for exposure to tick bites [13]. The incubation period is between 1 and 13 days. Case fatality rate is approximately 30 percent [14].

EVD was initially described in 1976 as the cause of two separate outbreaks, one in southern Sudan and the other in the Democratic Republic of the Congo in a village near to the Ebola River [19]. EVD outbreaks in humans have only been reported in countries of sub-Saharan Africa. Prior to 2014, recorded case numbers and deaths from EVD were relatively low [20, 21].

The World Health Organization (WHO) reported a major EVD outbreak from 2014 to 2016 in West Africa [19]. This was the largest outbreak since the virus was first discovered and the first time EVD outbreaks were reported in West Africa [19, 21]. The outbreak started in Guinea and then spread across land borders to Sierra Leone and Liberia [19]. Over 28,000 cases and 11,000 deaths were reported and, whilst this outbreak was focused in Guinea, Liberia and Sierra Leone, cases and small clusters of infections also occurred in neighbouring countries of Nigeria, Mali and Senegal. Imported cases occurred in Italy, Spain, the United Kingdom and the USA [20, 21]. By June 2016, the three West African countries were free of EVD [19]. Since 2016, significant EVD outbreaks have been reported in Guinea and the Democratic Republic of the Congo [22].
The natural animal host for Ebola virus is thought to be fruit bats. Humans may become infected when they have close contact with bodily fluids of infected animals (e.g. bats and primates). Person-to-person transmission may then occur through direct contact of broken skin, eyes, nose, mouth or during sexual contact (vaginal, oral or anal) or contact with:

The incubation period of EVD is between two and 21 days. Case fatality rates vary between 25 and 90 percent depending on the virus species, patients’ age and many other factors [19, 21]. Vaccines to help protect against EVD have been developed and have been used in the control of outbreaks in the Democratic Republic of the Congo and Guinea since 2018 [19].

Marburg virus causes a severe and sometimes fatal haemorrhagic fever, which clinically is very similar to EVD. It was first recognised in 1967 when an outbreak occurred amongst laboratory staff in Marburg and Frankfurt, Germany, and in Belgrade, Serbia (formally Yugoslavia). The affected laboratory workers had contact with blood, organs or cell-cultures from African green monkeys imported from Uganda. Cases or outbreaks of MVD are rare, but have been reported in Angola, the Democratic Republic of the Congo, Guinea, Kenya, Uganda and South Africa (in an individual who had visited Zimbabwe). The largest recorded MVD outbreak was in Angola in 2004 and involved 374 cases, including 329 deaths [23]. An outbreak occurred in Uganda in 2017 [24].

Cases in travellers are rare. However, two travel related cases were reported in 2008 after visits to a “python cave” in the Maramagambo Forest in western Uganda. This cave is home to a large colony of Egyptian fruit bats. Both travellers became ill after returning home; one in the Netherlands and one in the USA [23].

In August 2021, a fatal case of MVD was confirmed in the N’zérékoré Region of Guinea, near the borders of Liberia and Sierra Leone. This is the first known MVD case reported in Guinea and in West Africa [25].

It is thought that fruit bats are the main natural host for Marburg virus. See Ebola and Marburg haemorrhagic fevers: outbreaks and case locations. Transmission to humans may occur through exposure to infected bats, for example, in caves or mines. The virus may then be transmitted from person-to-person via close contact with an infected patient. Blood or other bodily fluids (faeces, vomit, urine, saliva and respiratory secretions) can contain a high concentration of virus. Sexual transmission of the virus may occur. Close contact with the body or bodily fluids of a person who has died of MVD, during preparation for burial, is a recognised source of infection. The incubation period of Marburg haemorrhagic fever is typically three to ten days, but rare cases of longer incubation periods of up to four weeks have been reported Estimates of case fatality rate rates range from 23 to 88 percent [26].