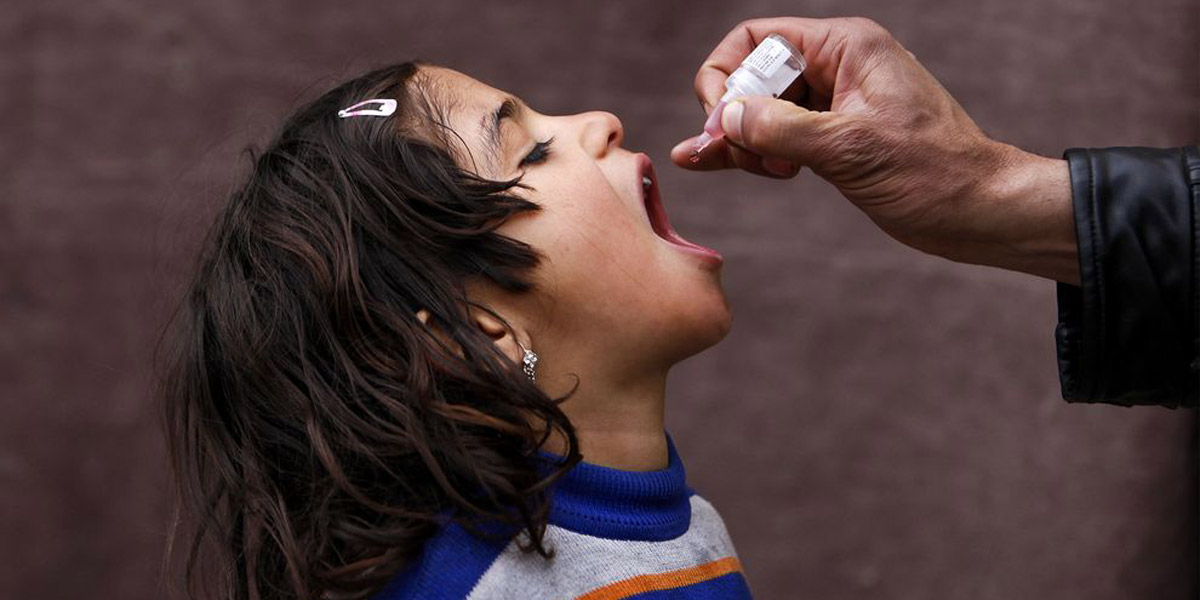 Poliomyelitis (polio) is a potentially paralysing viral infection that exclusively infects humans. The virus is usually transmitted through person to person contact by the faeco-oral route or through food or water contaminated by infected human faeces [1]. There are three types of human poliovirus: serotypes 1, 2 and 3. Over the last few decades polio has been brought to the brink of global eradication through vaccination. However, the disease does remain problematic in some parts of the world. The virus initially infects the human gastrointestinal tract where it divides and may spread to the nervous system potentially causing paralysis [2].

Most individuals who acquire polio do not develop symptoms. When symptoms do occur, they may range from a mild illness with fever, to meningitis (inflammation of the lining of the brain) or paralysis. The paralysis caused by polio is characterised by a reduction in muscle tone and is known as ‘acute flaccid paralysis’. Although paralysis occurs in less than one percent of infections it may be permanent. The overall risk of polio to travellers is very low with the last imported case in the UK occurring in 1993.

The oral polio vaccine (OPV) was developed in the 1960s and consisted initially of a mixture of live, attenuated (weakened) poliovirus strains of all three poliovirus types. One of the benefits of OPV is that individuals who receive the vaccine will shed the weakened virus in the stool potentially passing it on to close contacts [2]. This has the effect of spreading immunity through the local population. However, very rarely, in seriously under-immunised populations, there are enough susceptible children for the OPV viruses to begin circulating in the community. Over time the OPV virus may mutate to a strain capable of causing outbreaks of paralytic polio [3]. These viruses are called circulating vaccine-derived polioviruses (cVDPV) to differentiate them from wild-type poliovirus. More recently a bivalent OPV containing only types 1 and 3 polioviruses is being used in some countries [4] due to emergence of type 2 cVDPV.

Global efforts to eradicate polio began in 1988 with the launch of the Global Polio Eradication Initiative (GPEI). The main tool in this process has been the implementation of oral polio vaccine (OPV) programmes [5]. These programmes have brought polio virus to the threshold of eradication with cases having declined by over 99 percent, from an estimated 350,000 cases yearly in 1988 to 37 reported cases in 2016 [6]. Serotype 2 poliovirus was eradicated in 1999 [4,6] and serotype 3 poliovirus has not been detected since November 2012 [4].

Four of the six World Health Organization (WHO) regions have been declared free from wild-type polio (although outbreaks of cVDPV may occur in these areas) [7]:

Not yet polio free

Currently Afghanistan and Pakistan are the only two countries (both in the Eastern Mediterranean region) that remain endemic for polio. Nigeria was removed from the list of polio-endemic countries on the 25th of September 2015 [8] but in August 2016 wild polio serogroup 1 was detected [9]. This is the last country in Africa to have reported polio transmission.

Outbreaks caused by cVDPV are rare with only 20 outbreaks occurring between 2000 and 2011 causing 580 cases of polio. During the same period wild-type polio virus paralysed over 15,500 children [3]. Outbreaks of cVDPV may occur in countries that have already eliminated wild-type polio. They are one of the final challenges that must be tackled prior to global elimination of polio. The use of OPV is being phased out worldwide and replaced with inactivated polio vaccine (IPV) which is not associated with cases of cVDPV [4]. Healthcare professionals and travellers can check the latest wild-type and cVDPV outbreak data at the GPEI website.

From time to time polio is exported to countries previously declared polio free. On 5 May 2014 the WHO declared a Public Health Emergency of International Concern (PHEIC) in response to an unexpected increase in exportation of polio from infected countries [10]. WHO has made a series of recommendations to counter this increasing trend [11]. These recommendations may require travellers who visit a certain country for more than four weeks to show proof of polio vaccination four weeks to 12 months prior to departure from that country. Proof of vaccination is not required on departure from the UK. Countries affected by these recommendations are regularly updated by WHO according to the latest available data. At this point it is unclear how long these temporary recommendations will remain in place. It is important to understand that these recommendations are issued in-order to prevent the global spread of polio and not to protect the individual traveller. Individual country recommendations can be found on our Country Information pages. Guidance on completing a polio vaccination certificate is available in our factsheet.

Polio is extremely rare in UK travellers with the last imported case occurring in 1993. Travellers are at increased risk if they visit areas where outbreaks of poliovirus or cVDPV are occurring, particularly if: they visit settings of extremely poor hygiene (e.g. refugee camps), have close contact with cases (e.g. healthcare workers) and/or are visiting for six months or more.

Polio in the UK

There have been no confirmed cases of indigenous wild type polio reported in England and Wales since 1984 [12]. The last imported case was in 1993, when a UK traveller acquired polio in India [13].

The virus is usually transmitted by person to person or by the faecal-oral route by the consumption of faecally contaminated food or water. Oral secretions may contain virus and can play a role in transmission [12]. Poliovirus can be excreted for three to six weeks in faeces and two weeks in saliva. Cases are most infectious immediately before, and one to two weeks after the onset of paralytic disease [12].

The vast majority of all polio infections occur without symptoms [2, 14].

The incubation period for polio varies from three to 21 days [12], and clinical illness can be categorised according to the severity of symptoms:

An illness similar to a typical viral infection occurs in around 24 percent of patients [15]. Symptoms may include sore throat, fever, nausea and vomiting. There is no central nervous system invasion and recovery occurs in less than a week.

This occurs in one to five percent of polio infections in children and is characterised by non-specific symptoms followed by headache, fever and stiffness of the neck. It lasts from two to ten days, with complete recovery [15].

This occurs in less than one percent of all polio infections [2, 15]. It is characterised by a minor illness of several days followed by a symptom free period of one to three days before a rapid onset of flaccid paralysis over a few days [2]. Paralysis more commonly affects the legs than the arms and is usually asymmetrical. One in 200 infections results in irreversible paralysis, usually of the legs [6]. Of those who develop paralysis five to ten percent will die due to respiratory muscle paralysis [6].

Rarely, people who have recovered from polio, develop a recurrence or worsening of muscle weakness. This usually occurs more than 15 years after the original infection and is called post polio syndrome [2].

Polio should be suspected if clinical symptoms consistent with the disease develop in an individual that has visited a risk area. The diagnosis of polio is made by identifying poliovirus in clinical specimens (usually stool or upper respiratory tract swab) obtained from an infected patient. Polymerase chain reaction (PCR) is a method used to detect genetic material of organisms. This technique can be used on patient samples to confirm the serotype of poliovirus present and whether the virus is wild type polio or a cVDPV strain.

Shedding of the virus in stool specimens can be intermittent, but usually poliovirus can be detected for up to six weeks after onset of illness. During the first three to ten days of the illness, poliovirus can also be detected from mouth or throat specimens. Poliovirus is rarely detected in the blood or cerebrospinal fluid.

There is no medication available to treat polio and treatment is supportive. This ranges from treatment of pain and fever to respiratory support, intubation and mechanical ventilation if respiratory muscle paralysis occurs. Individuals developing long-term paralysis will require on-going rehabilitation and support. Polio is a notifiable disease in the UK.

As polio is transmitted via the faecal-oral route, strict personal and food and water hygiene is an important preventive strategy in addition to vaccination.

Infection with one of the three virus serotypes of polio does not confer immunity to the other two types. A previous history of poliomyelitis is not a contraindication to vaccination.

The objective of the UK immunisation programme is to provide a minimum of five doses of a polio-containing vaccine at appropriate intervals for all individuals [12]. For adults and children from 10 years of age, who have not received polio vaccinations in the past, a three-dose course of the vaccination can be provided.

Polio vaccine is recommended for:

* Recommended for pregnant women between 16 to 32 weeks to protect unborn child against whooping cough (pertussis).

In most circumstances five doses of polio containing vaccine at the appropriate intervals is considered to give satisfactory long-term protection in the UK. However travellers to areas or countries where there are recent reports of polio and whose last dose of polio vaccine was ten or more years ago should be offered a booster dose of a polio containing vaccine. See our Country Information pages for individual country recommendations.

OPV is not available in the UK but is still used in some countries. As OPV is a live, attenuated (weakened) vaccine, it may very rarely cause a polio-like infection in the individuals who have taken the vaccine or their close contacts. When this occurs the infection is termed vaccine associated paralytic polio (VAPP). It is extremely rare [16]; the incidence has been estimated at 2–4 cases/million birth cohort per year in countries using OPV [17]. They occur most frequently in individuals with a poorly functioning immune system [16].

Following administration of IPV, pain, swelling or redness at the injection site are common [13] these symptoms usually resolve without treatment in 1-2 days. Severe allergic reactions are extremely rare [13]. A full list of possible undesirable effects can be found in the summary of product characteristics for each vaccine (click on the vaccine names in the table above).